Review of the Tineco Pure One S12 Stick Vac 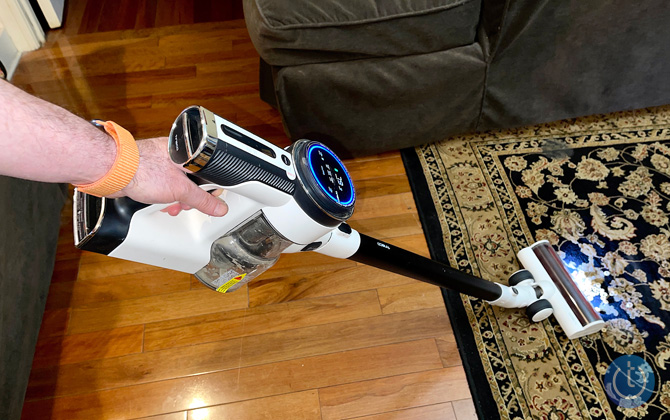 Tineco'sPure One S12 ($499) is arguably the most fascinatingly featured stick vac I've run across – just listing the number of helpful bells & whistles can get dizzying:

The S12 is also quieter than other stick vacs I've tested – at its noisiest it generates a relatively subdued 71db of suction sound. A front LED light on its primary multi-surface brush illuminates the dirt ahead of it. There's also an accompanying app, although I couldn't discover its real-world value.

My only hesitancies to recommending the Tineco Pure One S12 at its sometimes discounted $429.99 price over the entry-level $499 edition of the Miele Triflex HX1 is the latter's top-shelf suction and modular flexibility (you can move the motor so it can stand alone upright), and the former's need to be wall mounted to charge. But at the S12's regular $499 price, even with all its unique pluses, I consider the entry level Miele Triflex HX1 a slightly superior stick vac value.

Setting up the Tineco Pure One S12

Upon first setting up the S12 you are confronted with this stick vac's biggest problem: the wall mount. All other stick vacs I've encountered include a wall mounting option, but all also can be charged without screwing anything into your wall. But with the S12's design, you need the permanently attached wall mount to hang charge the S12, an unnecessary necessity.

Attachments that are included:

Also included is a slightly larger than average 20.3-ounce (600 milliliter) dustbin so you won't need to empty it as frequently as other vacs with smaller dustbins.

Using the Tineco Pure One S12

S12's suction ranks just slightly below the Miele Triflex HX1 and the Dyson V15 Detect. And like these two top models, what the S12 sucks up stays sucked up – there's no dirt leakage from the cleaning head or the wand when you switch off power or switch attachments. Its suction was so powerful that I had to push hard across high or even medium pile rugs, and the S12 sometimes skipped when I pushed it. But I generally encountered few problems sucking up any of the substances I tested it with, including pet hair.

The S12's most unique feature is its auto/manual speed settings. In auto mode, the suction speed audibly and visibly adjusts depending on the surface and the cleaning need as sensed by the S12. If you don't like the frequent auto adjustments, just run your finger up or down the vertical surface on the handle to manually adjust the suction speed as high or low as you want; a white bar LED on the LCD screen indicates the power level.

Encircling the LCD screen is a "dust monitoring loop" LED. As you start the LED circle is all blue. As you encounter more dust, sections of the "loop" turn red. As you clean an area the LED turns slowly back from red to blue, but I never seemed to get back to solid blue on any surface I vacuumed. The "loop" LED combined with the front light on the primary 9-inch-wide cleaning head that illuminates the area to be vacuumed are better at confirming that you haven't missed a spot than with any other stick vac I tested. (The entry-level Miele Triflex HX1 lacks this cleaning head light.)

Maintaining the Tineco Pure One S12

The Tineco S12 is the easiest to maintain stick vac I tested. It's easy-to-remove brush roller is quickly cleared of hair using the including hooked cutting tool. My only complaint is the roller's black color, which makes it hard to see any remaining dark-colored hair.

Removing and cleaning the S12's filters is even easier. A HEPA filter installed in the top of handle requires just a push of an inset release to pull out for easy rinsing. Even better is cleaning the pre-filter – which helps maintain top suction – easily twists out from inside the dustbin. The S12 comes with two pre-filters, one of which is inside the separate filter cleaning attachment. Just insert the dirty filter into the including cleaning attachment, connect the cleaning attachment to the vacuum, set the suction to its highest speed and, in five seconds or so, the filter is sucked clean – no running it under water and waiting 24 hours for it to dry. It's a uniquely clever and efficient solution.

If you can find the Tineco Pure One S12 discounted from its regular $499 price, you'll score a cheaper and reasonable alternative to our top stick vac pick, the Miele Triflex HX1. The S12's finely tuned auto and manual suction modes are unmatched, you get a better cleaning confirmation, and it's almost a pleasure to clean. But, at its regular $499 price and with its required wall mounting, the S12 falls short of matching the overall function and value of entry-level edition of the Miele Triflex HX1, but is preferable to the LG CordZero Ultimate ($599) and maybe even the most powerful stick vac, the Dyson V15 Detect ($699.99)