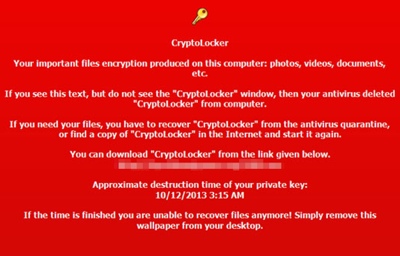 Finding malware on your computer is never a good time. But security researchers are urging extra caution about CryptoLocker, a scary new Trojan that encrypts your computer files and holds them for ransom.

When an unsuspecting person downloads CryptoLocker, their computer’s files are immediately encrypted. If a ransom of $300 is not paid, the malware warns, the encryption key will be deleted and all your computer’s files will be forever inaccessible. Those held hostage have 3 days to comply with the demands.

What makes CryptoLocker especially terrifying is that it seems largely impervious to even the best anti-virus software once a computer is infected. Cloud backup won’t help either – the infection itself will be backed up as well.

Some users on Reddit reported paying the ransom and have had their computers unlocked. Others paid the ransom only to be left hanging by the cybercrooks. It looks like there’s no honor amongst thieves, making recovery a potentially impossible venture. Once your files are encrypted, they may never be accessible again.

A report by ArsTechnica suggests that the ransomware may spread by email, as one victim reported receiving an infected zip file in his inbox purporting to be from Intuit. Since the virus is so dangerous, you’ll want to use extra caution as the CryptoLocker infection continues to spread. Our recommendation: Make an offline backup of all your files to further protect yourself in case your computer does get compromised. It’s not just a protection against this virus – it’s a computing ‘best practice.’