How to Block Calls on an iPhone 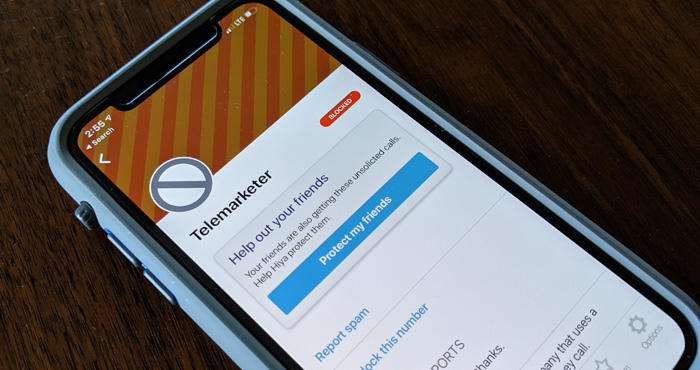 Apple iPhone has built-in call blocking – in your Phone app under Recents, tap the info icon next to a phone number or contact you want to block, scroll to the bottom of your screen, then tap Block this Caller. If you want to block a number that hasn't called you, go to Settings, then scrolling to Phone. In the Calls section, go to Call Blocking & Identification – here you will be able to add a number.

But this method isn't very useful. First, a spammer has to call you before you can block the number. And since spammers rarely use the same number, or use the “neighborhood spoofing” technique, where they call from what appears to be your area code and prefix to trick you into answering, this won’t block the majority of spam calls we get. And, unlike Android, there is no built-in call blocking feature for known spam numbers.

2. Use an iPhone spam blocking app

There are countless apps in the App Store that claim to be call blockers. But you have to be careful about which you install – you’re giving them full access to your phone, texts, contacts and more. You want to find a well-known developer was a large community of users reporting calls to the suspected spam list. I strongly recommend going with one of the top-rated brand name choices, such as Hiya or Truecaller. While both these apps will block calls, neither can stop those calls from going to voicemail.

Personally, I prefer Hiya. It has an extensive community-driven blacklist and, critically, allows you to block neighborhood spoofing calls (area code and prefix blocking), and even provides caller ID features that you would usually have to pay for with your carrier. You can download the free version if you just want the call blocking. The $2.99 per month subscription version gets you the caller ID, name lookups and more frequent spam updates.

Truecaller also has a massive user community and its free version offers spam call blocking and caller ID. However, it doesn't have that critical area code blocking feature needed to stop those neighborhood spoofing calls.

Once you pick a call blocking app, you will need to give the app permission to block calls on your iPhone.

Even if you're an iPhone user, you can still use Google Voice to block spam calls. Better yet, Google Voice can be set up to prevent those calls from going to voicemail.

The trick is you need to switch to Google Voice as your main number and stop giving out your old carrier number. With Voice, you can block known spam calls in three ways: by sending those calls to voicemail, by treating the call as spam (letting the caller leave voicemail but tagged as spam) or by call blocking (in which case the caller will hear a “Number not in service” message and will not be able to leave voice mail).

The big drawback here is that your Google Voice number now becomes your main number, which you forward to the number from your carrier, and that takes some work to transition. And there’s still no guarantee that spam callers won’t call your carrier number directly, either because it’s already out there (learn how telemarketers get your number) or simply because the robodialers are going through every number combination.

Truly effective call blocking and voicemail prevention should be at the carrier level. It’s the carriers who have the technical capability to identify call origination sources and create services that prevent spam and blocked calls from going to voicemail (since they’re the ones that control the voicemail service). And all the carriers have some level of blocking on their networks to weed out the most obvious and egregious spammers. Significant improvements will come as carriers roll out the new SHAKEN/STIR framework. Until then, these are your options.

Of the four major carriers, AT&T has the most effective tools for blocking spam calls and it’s the only one that actually lets you stop these calls from going to voicemail. AT&T postpaid customers with HD Voice Android can activate AT&T’s free Call Protect service on their accounts. Call Protect will block known spam calls entirely, preventing them from leaving a voicemail. And with the companion Android app you can also block specific numbers, but not area codes and prefixes.

If you want more features, you can upgrade to Call Protect Plus for a pricey $3.99 a month. Call Protect Plus users can block categories of calls, including: private callers, debt collectors, telemarketers, surveys, and general spam. You can choose to have these calls go to voicemail or be blocked entirely. Unfortunately, there is no option to block local number spoofing.

Sprint offers Call Screener Basic, which provides a minimal level of free protection from spam calls, identifying and providing the option to block what Sprint calls "only the highest-risk spam calls." Stepping up to Call Screener Plus for $2.99 per month will shield you from lower-risk nuisance calls, let you mark numbers as spam, among other caller ID features.

T-Mobile sits in the middle when it comes to spam call protections. For postpaid customers, T-Mobile’s free Scam ID service is automatically activated and will notify you of potential spam calls. But what you really want is their Scam Block feature, which will block these calls from ever reaching your device and prevent the caller from leaving a voicemail. Scam Block is also free but requires you to manually activate it, which you can do simply by dialing #662# from your phone (you can also disable it by dialing #632# if it is blocking any valid calls). There is no option to block categories of calls or neighborhood spoofing. Though, for $4 a month, you can get the not-very-useful Name ID service with more advanced caller ID and caller category info.

In my experience, plenty of spam calls still get through Scam Block, especially of the neighborhood spoofing variety, so it's really unfortunate area code/prefix blocking isn't offered.

Verizon’s Call Filter will identify likely spam callers and give you the option of automatically blocking them. Stepping up to Call Filter Plus ($2.99 per month per line or $7.99 for 3+ lines) lets you block calls based on risk level: High Risk, Medium Risk or All Risk Levels. However, only High Risk calls will be stopped from going to voicemail. You'll be able to create a personal block list, but Verizon does not offer area code/prefix blocking.

None of these solutions are perfect, so we're anxiously awaiting a full rollout of the SHAKEN/STIR, something the FCC has made abundantly clear to carriers need to happen. If you're having a similar issue with your other phones, read our advice for blocking spam on your landline and your Android phone, too.

I found this one

I will be using the app “WideProtect Spam Call Blocker”

It allows you to block spammers using phone number prefixes.
•  Forget about unwanted calls, SMS and MMS, and spammers spoofing tricks.
•  No subscriptions, no in-app purchases, pay once and use for any ranges you need!
•  Now the app supports blocking up to 50,000,000 phone numbers - whole 5 area codes in the USA!

Why not allow users to block area codes on iPhone

Why can’t, or better yet, why WON’T Apple allow you to block entire area codes?  I had a Samsung phone, before everyone in my family insisted that I “needed” an iPhone.  With that Samsung phone, I was able to block entire area codes FOR FREE without any special app.  So the technology is there to do it, it’s just a matter of why Apple won’t allow it.  I’m not an expert on technology, but if it is a feature on Samsung, then why not with an iPhone?  Maybe there is a legit reason, but still curious to know why it can be done with one type of phone and not others.  Has nothing to do with the carrier, as I’ve had the same carrier with both phones.

All the apps out there will still allow spam calls in to a certain degree.  The “Do Not Disturb” feature on the iPhone works just as well as any of those apps.  It only allows contacts to ring thru, but still allows spam calls to leave voicemail.  I guess it’s better than nothing for now.