iPhone 5C and 5S More Fragile than the iPhone 5 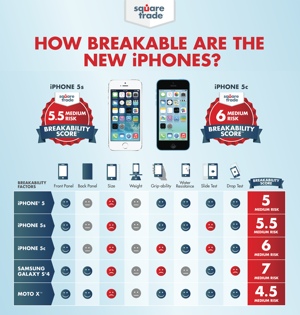 Apple packed a number of upgrades into the new iPhone 5S. There’s a fingerprint scanner, a faster processor, a motion-tracking chip and an improved camera. But according to phone insurer SquareTrade, there’s one area where the latest iPhone falls short of its predecessor: breakability.

Both the 5C and 5S took a ratings hit for their performance in the Slide Test, meant to replicate the act of the phone sliding off a kitchen counter. The bargain-priced iPhone 5C, according to SquareTrade, “suffered from increased smash-ability in our drop test as well as reduced grip-ability.”

Though Apple may have made its flagship phone more fragile, it’s still holding up better than Techlicious’s favorite Samsung Galaxy S4, which earned an ugly score of 7 in the tests. Google’s made-in-America Moto X scored a 4.5, meanwhile, making it the sturdiest phone of the bunch.