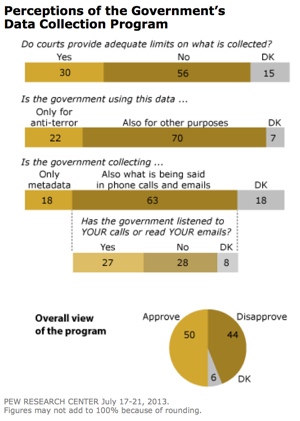 When news of the National Security Agency’s PRISM program broke, I assumed Americans would be outraged. After all, the government is collecting massive amounts of metadata on private citizens without any real accountability or transparency to the process. It may not quite be Big Brother, but it’d probably be enough to give George Orwell a serious case of the chills.

It turns out my initial assessment of the public's sentiment was a bit off. According to a new poll from the Pew Research Center (.pdf), 50% of Americans approve of the government’s PRISM data-collection program, with just 44% standing unopposed.

The results of the poll closely mirror last week’s congressional vote to defund the NSA’s spying program. Rep. Justin Amash’s (R-MI) effort narrowly fell short of passing with a vote of 205 to 217.

Here’s the thing though – while America supports PRISM, it’s incredibly untrusting when it comes to the specifics of the program. A stunning 70% of those polled think the government is collecting data for purposes other than to combat terrorism. Further, 63% believe that the government isn’t just collecting metadata, but also the contents of phone calls and emails.

The poll seems to suggest that Americans rate protection from terror attacks higher than protection from the eyes of the government. But Sens. Ron Wyden (D-OR) and Mark Udall (D-CO) dispute PRISM’s success in protecting the country, writing in a joint statement that they "remain unconvinced that the secret Patriot Act collection has actually provided any uniquely valuable intelligence." Wyden and Udall have been working to scale back the government's spying efforts.

“If we don’t seize this unique moment in history to reform our surveillance laws and practices,” explains Sen. Wyden, “we will all live to regret it.” At the moment, the U.S. public seems to disagree.