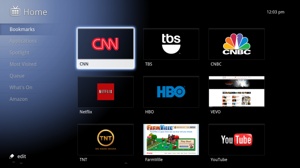 Live cable TV channels may one day be available
on Google TV boxes.

Your local cable TV monopoly may be about to come crashing down. According to a report in the New York Times, Internet supercompany Google is working on a deal with the nation’s largest TV channels to begin offering their live broadcasts online via a new subscription-based service.

Instead of renting a cable box from Time Warner or some other miserably rated cable provider, you’d watch live TV through a basic Internet connection. You’d still be using a remote to flip through channels, and you would still be watching on a television (presumably through a Google TV device).

Don't cut the cable cord just yet, though. Making TV channels available on the Internet is a simple technical matter, but the nation’s biggest media companies aren’t making things easy for Google. Cable provider Comcast owns fourth-place network NBC as well as Bravo, E!, The Golf Channel, USA and SyFy, so it (and other media conglomerates) has good reason to avoid the negotiating table. And with cable TV still profitable, distribution companies have little desire to shake things up in their industry.

Google isn’t the only company looking to offer cable TV via the internet – Apple has been in talks with service providers to offer live broadcasts for some time. Apple’s approach to Internet TV viewing, however, would require you to maintain your existing cable TV subscription.