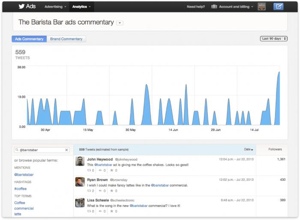 The fraudulent tweets went live on the Twitter blog in May to promote a new TV ad targeting feature. Neil Gottlieb of Philadelphia was quoted as saying, “What is the song in the new @baristabar commercial? I love it!” Of course, Gottlieb never said anything of the sort.

“It was pointed out to me that Twitter used my image and fake posting to promote their push to advertise via tweets,” said Gottlieb on Wednesday in an actual, non-faked tweet. “Violating my privacy is not right, Twitter.”

For its part, Twitter apologized for the incident. “An earlier version of this blog post included an image with mock Tweets from real users of our platform. This was not OK. Once we became aware of this mistake we took it down immediately. We deeply apologize to the three users included in the earlier images.”

Gottlieb has rejected the apology using his Twitter account. “Apology does not address issue and is arrogant and not sincere. Only after attorney was consulted did I hear anything.”

This is without a doubt an unfortunate event, but the optimist in me truly believes it was an honest accident caused by someone in a marketing department who wasn't really thinking. Twitter has its faults, but it's hardly the social network you should be worried about with regard to using your likeness for advertising. After all, Facebook has been using your name and Likes to sell products to your friends for years.