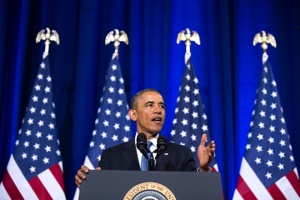 “The reforms I'm proposing today should give the American people greater confidence that their rights are being protected, even as our intelligence and law enforcement agencies maintain the tools they need to keep us safe,” the president said today during a visit to the Justice Department.

Under the president's new plan, the federal government will continue to collect metadata – that is, information about when, where and to whom a call was placed. This information will now be held by a non-governmental third party to help block abuses by other government agencies. Such a move was necessary given how it was reported last year that the NSA funneled data to the IRS and DEA to go after non-terrorist targets. The government will also cease eavesdropping on foreign officials outside of a compelling national interest.

Among the other reforms: National security letters requesting companies turn over data will no longer be able to remain secret indefinitely. The president also agreed to limit metadata searches to folks “two steps away” from suspected terrorists. That means, for example, if the feds suspect that the uncle of your son’s baseball coach is a bad guy, your phone records may get caught up in an NSA search.

Naturally, the president’s critics and NSA opponents panned the address. Kentucky Senator and 2016 Republican presidential hopeful Rand Paul stated he was “disappointed in the details,” and that “President Obama's announced solution to the NSA spying controversy is the same unconstitutional program with a new configuration.” Snarky D.C. blog Wonkette, meanwhile, joked that Obama “will reform NSA with platitudes, American flags.”

Of course, you’re better off making up your own mind about the president’s newest plans for the NSA. If you missed Barack Obama’s speech and would like to learn more, you can watch the full, un-edited address to the nation below.