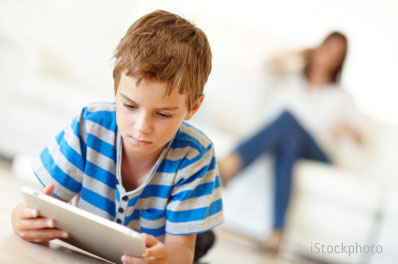 Whether you bought your child a computer, game system, tablet or smartphone for the holidays, you'll want to make sure it's safe for your child to use before setting him or her loose on it. That means setting up parental controls and installing Internet security software.

How to set up a computer

To protect against malware while your child is browsing the Internet, make sure there's Internet security software loaded and updated. Most computers come with at least a 30-day free trial, which will get you going until you buy a full subscription.

You can also prevent your child from making potentially destructive changes to the setup of the computer by setting up an administrator account for yourself and a standard account for your child, which is the default for Windows PCs and Macs.

You'll then be able to activate parental controls. Windows 8 comes with Family Safety, which lets you block inappropriate online content, set time limits and set maximum game ratings. If you chose to get a Windows 7 machine, you'll need to download Family Safety (free on Microsoft.com).

For Macs, you'll find Parental Controls within System Preferences. There, you'll be able to set time limits, block adult content on the Internet and limit who your child can chat with online using Safari.

How to set up a smartphone or tablet

Whether it's through Wi-Fi or 3G or 4G data network, smartphones and tablets connect to the Internet and present the same dangers as a computer. Plus, there's easy access to app purchases. So, it's wise to take the same types of precautions as you would with a PC and then some.

For iOS devices—iPhone, iPad and iPod touch—you can block access to the app store, Twitter and Facebook, among other apps. You can also determine which apps can read the device's location and set content ratings for music, apps and videos. All of these parental controls can be found under Settings and then Restrictions.

If your child will be accessing the Web, you may also want to consider loading AVG Family Safety for iOS (free on iTunes), which blocks inappropriate sites and includes a Do Not Track feature.

Android devices are a little more complicated. For most Android smartphones and tablets, you'll need to install an app like Net Nanny for Android ($20 per year, available on Google Play). It will let you block, manage and monitor apps, which means you can lock the app store and in-app purchasing. The app also provides web filtering and will replace swear words with characters like $%#@.

If you've purchased a Kindle Fire, the Nook HD or HD+ or a new Nexus 7 or 10 tablet running Android Jelly Bean 4.2, you'll find parental controls built in. All offer the ability to set up multiple profiles and apply parental controls.

How to set up a game system

Xbox 360, PlayStation 3, Wii and Wii U. All of the major video game systems offer some level of parental controls, protected by a password or code. So like computers and tablets, you'll want to set up a separate account for your child. At the most basic level (when the system isn't connected to the Internet), game systems will restrict access to games and other content based on its rating.

Once you connect the system to the Internet, which you'll probably want to do to watch videos, download inexpensive games and connect into multi-player games, you'll want to set controls for other problem areas, including web browsing, chat and purchases. The ESRB (Entertainment Software Rating Board) offers clear, detailed instructions for setting up parental controls on each of the four game systems.