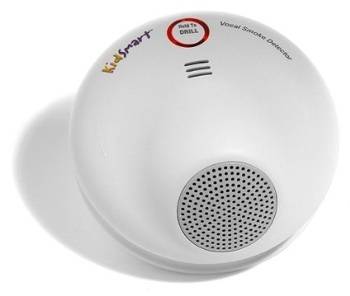 If you have children (especially young children), you may be interested in the KidSmart Vocal Smoke Alarm. It aims to address a major problem with smoke detectors and children, who often aren't immediately roused by a loud alarm.

KidSmart says two out of three children will sleep through a traditional smoke detector's alarm, while a child will wake to the sound of a parent's voice 96% of the time. So the KidSmart lets you record a message to wake your child and tell them what to do in case of a fire — a simple but effective step toward better fire safety.

Where can I buy one of these recordable vocal smoke detectors? The buy from amazon link does not take me any where.

These are no longer being sold in stores. Your can find them on Ebay, but I would be cautious about buying one. It’s not clear why they stopped manufacturing these and it could be because they didn’t perform as required or were recalled.

Am I right in understanding that they are not longer available from the manufacturer? They can ONLY be purchased through third parties?

That is my understanding

This is a very old product and it appears they were pulled off the market a long time ago. I don’t know if that was for safety or business reasons.